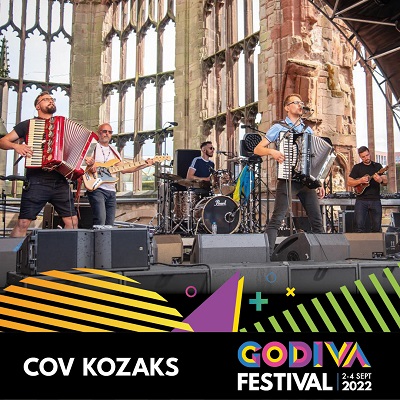 Cov Kozaks are a British-Ukrainian band who have been producing their own unique twist of traditional Ukrainian folk songs in their own unique British rock-punk-ska-funk style since 2016. In just 5 years, the band has played all over the U.K, travelled to Belgium and Ukraine as well as headlined many of the main UK Ukrainian Diaspora events including ‘Hospoda Live’ and ‘Kultura’ Music festivals and ‘Pyvofest 2017’ – the UK’s number One Ukrainian beer festival. The Cov Kozaks have also shared the stage with great bands such as Tuhaj Bej (PL) the Ukrainians (UK), as well as Ukraine’s very own Shpilasti Kobzari and Kozak System as part of their UK tours, entertaining crowds with their energetic and fast-paced style.

Not letting Covid-19 stop them the band recorded an acoustic rendition of “Сумно” which was released onto YouTube and as their first gig back the band were selected to perform at Coventry Cathedral Ruins for “The Home Sessions”, a series of gigs presented by Terry Hall, lead singer of legendary ska group “The Specials” as part of the Coventry UK City of Culture 2021 celebrations.

The boys have also found time to hit the studio and record and release: